He played for the Rockford Forest Citys of the National Association.From May 6 to May 30, Sager played in eight games for the club, four in left field and four at shortstop.

He was a below-average fielder at both positions, but did show speed and a strong bat.He went 11-for-39 (.282) with five runs batted in, five stolen bases, and nine runs scored.

One of Sager's teammates on the Forest Citys was 19-year-old future Baseball Hall of Famer Cap Anson, also from Marshalltown, Iowa. 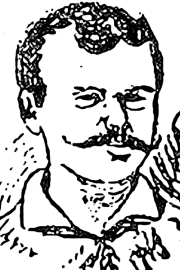