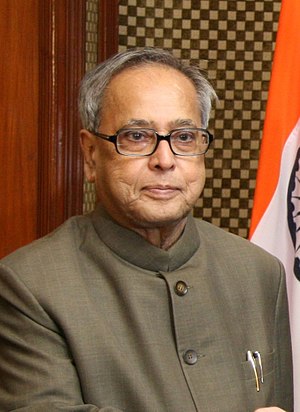 In a political career spanning five decades, Mukherjee was a senior leader in the Indian National Congress and occupied several ministerial portfolios in the Government of India.

Prior to his election as President, Mukherjee was Union Finance Minister from 2009 to 2012.He was awarded India's highest civilian honour, the Bharat Ratna, in 2019, by the President of India, Ram Nath Kovind.

Mukherjee got his break in politics in 1969 when the then Prime Minister Indira Gandhi helped him get elected to the Rajya Sabha, the upper house of Parliament of India, on a Congress ticket.

Following a meteoric rise, he became one of Gandhi's most trusted lieutenants and a minister in her cabinet in 1973.Mukherjee's service in a number of ministerial capacities culminated in his first stint as Finance Minister of India in 1982–84.

He was also the Leader of the House in the Rajya Sabha from 1980 to 1985.Mukherjee was sidelined from Congress during the premiership of Rajiv Gandhi.

Mukherjee had viewed himself and not the inexperienced Rajiv, as the rightful successor to Indira following her assassination in 1984.Mukherjee lost out in the ensuing power struggle.

He formed his own party, the Rashtriya Samajwadi Congress, which merged with Congress in 1989 after reaching a consensus with Rajiv Gandhi.

After Rajiv Gandhi's assassination in 1991, Mukherjee's political career was revived when Prime Minister P.V.Narasimha Rao appointed him Planning Commission head in 1991 and foreign minister in 1995.

Following this, as elder statesman of Congress, Mukherjee was the principal architect of Sonia Gandhi's ascent to the party's presidency in 1998.

When the Congress-led United Progressive Alliance (UPA) came to power in 2004, Mukherjee won a Lok Sabha (the popularly elected lower house of Parliament) seat for the first time.

From then until his resignation in 2012, he held a number of key cabinet portfolios in Prime Minister Manmohan Singh's government – Defence (2004–06), External Affairs (2006–09), and Finance (2009–12) – apart from heading several Groups of Ministers (GoMs) and being Leader of the House in the Lok Sabha.

After securing the UPA's nomination for the country's presidency in July 2012, Mukherjee comfortably defeated P.A.Sangma in the race to the Rashtrapati Bhavan (the Indian presidential residence), winning 70 percent of the electoral-college vote.

In 2017, Mukherjee decided not to run for re-election and to retire from politics after leaving the presidency due to "health complications relating to old age." His term expired on 25 July 2017.

He was succeeded as President by Ram Nath Kovind.In June 2018, Mukherjee became the first former President of India to address a Rashtriya Swayamsevak Sangh (RSS) event.