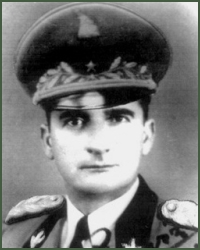 Prenk Pervizi (4 May 1897 – 6 September 1977) was an Albanian military figure, General of the Albanian army, who also served as Minister of Defence for a short period during World War II.Pervizi attended the Military Academy in Vienna, Austria, from 1914 to 1918, and later in Torino, 1930–1933.

As a military figure, he was a protagonist in the foreground of Albanian history in the years between 1918 and 1944.Friend and right-hand man of King Zog, he remained loyal from the beginning to the end to him and the Albanian Kingdom, 1928–1939.

During World War II he was involved in military operations.Recruited by the Italians and sent to the first line of combat, he came into conflict with them, withdrawing the Albanian troops from the Greco-Italian War.

He also opposed the German SS troops recruitment process in Albania.Bitter opponent of the communists, after failed attempts to engage some serious support from the British emissaries, he was forced to exile, first in Greece and later in Belgium as a political refugee.