A son of George XII, the last king of Kartl-Kakheti kingdom, eastern Georgia, by his first wife Ketevan Andronikashvili, Ioane commanded an avant-garde of a Georgian force annihilated by the Persian army at the Battle of Krtsanisi in 1795.

Following the battle, the kingdom entered a period of economic crisis and political anarchy.To eradicate the results of a Persian attack and to overcome the retardation of the feudal society, Prince Ioane proposed on 10 May 1799, a project of reforms of administration, army and education.

This project was, however, never materialized due to the weakness of George XII and a civil strife in the country.

In 1800, he commanded a Georgian cavalry in the joined Russian-Georgian forces that defeated his uncle, Alexandre Bagrationi, and the Dagestani allies at the battle of Niakhura.

Upon the death of George XII, Kartl-Kakheti was incorporated into the expanding Russian Empire, and Ioane was deported to Russia.

He settled in Saint Petersburg where he wrote most of his works with a didactic encyclopedic novel Kalmasoba (1817–1828) being the most important of them.

His manuscripts were discovered in 1861 by a Georgian scholar, Dimitri Bakradze, who published them in an abridged version in 1862.He married in 1787, Princess Ketevan Tsereteli (1775–1832), daughter of Prince Zurab Tsereteli (1747–1823), Mayor of the Palace (sakhlt-ukhutsesi) of Imereti, and had the only son, Grigol. 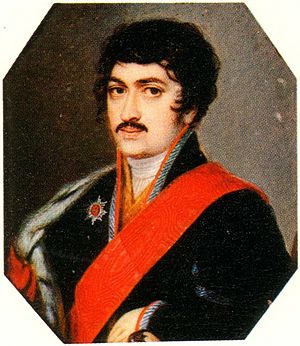