Born at the Neues Palais in Potsdam, she was the second child and eldest daughter of Prince Frederick of Prussia, a member of the House of Hohenzollern who became Crown Prince of Prussia in 1861 and German Emperor in 1888.

Through her mother Victoria, Princess Royal, Charlotte was the eldest granddaughter of the British monarch Queen Victoria and her consort Prince Albert of Saxe-Coburg and Gotha.

Princess Charlotte was a difficult child and indifferent student, with a nervous disposition.Her relationship with her demanding mother was strained.

As she grew older, Charlotte developed a penchant for spreading gossip and causing trouble.Eager to escape from parental control, at age seventeen, she married Prince Bernhard of Saxe-Meiningen in 1878.

Her husband's weak-willed personality had little effect on her.Known for spreading gossip and her eccentric personality, Princess Charlotte enjoyed Berlin society while frequently leaving her only child, Princess Feodora, in the care of family members.

Charlotte and Feodora, in turn, also had a difficult relationship.Charlotte's brother succeeded their father as Emperor Wilhelm II in 1888, increasing her social influence.

Throughout her brother's reign, she was known for her mischief-making, and spent her life in between bouts of illness, in frivolous and extravagant pursuits.

She became Duchess of Saxe-Meiningen in 1914, only for her husband to lose his title with the end of World War I in 1918.

Charlotte died the following year of a heart attack in Baden-Baden.She had suffered from a lifetime of ill-health.Most historians now believe she had porphyria, a genetic disease that afflicted the British royal family. 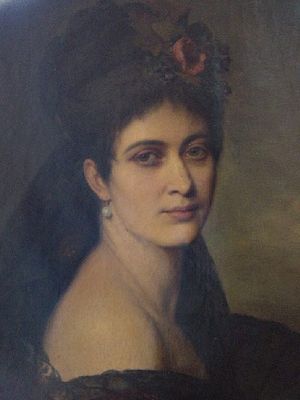