Princess Elisabeth of Hesse and by Rhine 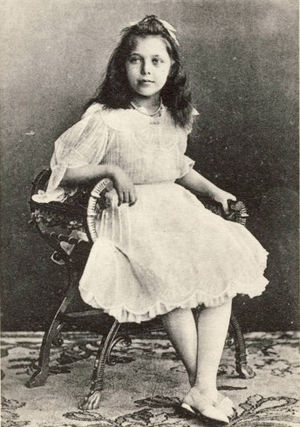 Princess Elisabeth of Hesse and by Rhine (Elisabeth Marie Alice Viktoria; 11 March 1895 – 16 November 1903) was a German Hessian and Rhenish child princess, the only daughter of Ernst Ludwig, Grand Duke of Hesse and by Rhine, and his first wife, Princess Victoria Melita of Saxe-Coburg and Gotha.

She was named after her paternal great-grandmother, who was born Princess Elisabeth of Prussia.Her paternal aunt had the same name and was also nicknamed Ella.

Elisabeth's early death was rumored to be a result of poison meant for her uncle, Tsar Nicholas II, but the said she died of virulent typhoid, probably caused by her taking a drink of water from a contaminated stream.

Grand Duke of Hesse
Back
This content was extracted from Wikipedia and is licensed under the Creative Commons Attribution-ShareAlike 3.0 Unported License