Pandit Puttaraj Gawai (3 March 1914 – 17 September 2010) was an Indian musician in the Hindustani classical tradition, a scholar who authored more than 80 books in Kannada, Sanskrit and Hindi, a music teacher and a social servant.

A member of the Gwalior Gharana (school), he is renowned for his ability to play many instruments such as the veena, the tabla, mridangam, violin etc., as well as for his popular renditions of devotional music (bhajans) vachanas.A famous vocalist both in Hindustani and Carnatic Music.

He is the recipient of the Padma Bhushan, India's third highest civilian honour, awarded in 2008. 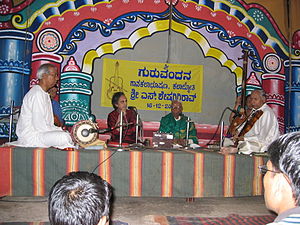 Indian singer
Back
This content was extracted from Wikipedia and is licensed under the Creative Commons Attribution-ShareAlike 3.0 Unported License