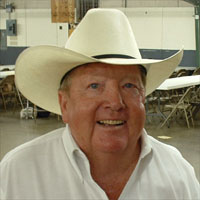 His parents were Acie and Avis Dobbs, and his childhood was marked by many moves.In the late 1950s, the family moved to Colorado City.

In 1964, Dobbs married a high school classmate named Judy, and the couple had two children, Stephanie and Coley.In 1972, he made his acting debut as a rodeo clown in the movie J.

He was one of only three men to work as both a bullfighter and barrelman at the National Finals Rodeo, and also worked seven times as a barrelman for the Wrangler Bullfight Tours Final.

He also worked 28 times at the Cheyenne Frontier Days in Wyoming, and the 1998 Frontier Days marked Dobbs' last appearance in professional rodeo.

After his retirement, he became justice of the peace in Coahoma, Texas a position he held until his passing in 2014.