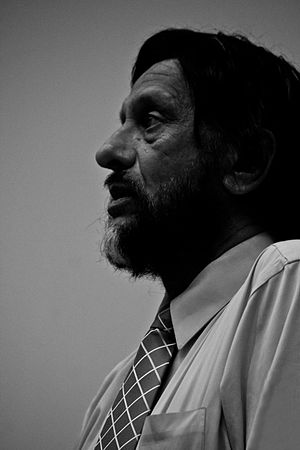 Rajendra Kumar Pachauri (20 August 1940 – 13 February 2020) was the chairman of the Intergovernmental Panel on Climate Change (IPCC) from 2002 to 2015, during the fourth and fifth assessment cycles.

Under his leadership the IPCC was awarded the Nobel Peace Prize in 2007 and delivered the Fifth Assessment Report, the scientific foundation of the Paris Agreement.

He held the post from 2002 until his resignation in February 2015 after facing multiple allegations of sexual harassment.He was succeeded by Hoesung Lee.

Dr Pachauri assumed his responsibilities as the Chief Executive of The Energy and Resources Institute in 1981 and led the institute for more than three decades and demitted office as Executive Vice Chairman of TERI in 2016.

Dr Pachauri, universally known as Patchy, was an internationally recognized voice on environmental and policy issues, and his leadership of the IPCC contributed to the issue of human-caused climate change becoming recognized as a matter of vital global concern.