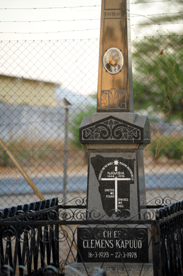 Kapuuo was one of the leading opponents of South African rule of his country until his assassination following the Turnhalle Constitutional Conference.