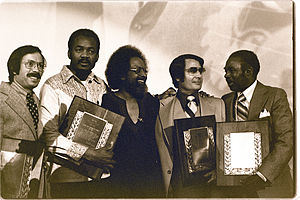 Robert Gnaizda (/ɡəˈneɪzdə/ gə-NAYZ-də) (August 6, 1936 – July 11, 2020) was the co-founder, General Counsel and Policy Director for the Greenlining Institute based in Berkeley, California.

He was known as an advocate of social justice for over 40 years.Gnaizda was born in Brooklyn, in New York City, NY, to Samuel and Sandra (née Ackerman) Gnaizda.

He was raised in the Brownsville section of the borough.After Stuyvesant High School, he was graduated from Columbia College of Columbia University in 1957 and Yale Law School in 1960; he was admitted to the California Bar on January 9, 1962.

Prior to co-founding the Greenlining Institute, he was the chief counsel for America’s first legal service program for rural families, California Rural Legal Assistance, which was founded by James D.

He served under former California Governor Jerry Brown as California's Health Director and Chief Deputy Secretary for Health, Welfare and Prisons and was the State Bar representative for the Federal Judicial Selection Committee.

He was chief counsel in over 100 class action court and administrative cases focusing on minority economic empowerment and civil rights.

In 2009, he was recipient of The Loren Miller Legal Services Award.The award is given annually and honors an attorney who has demonstrated long-term commitment to legal services and who has personally done significant work in extending legal services to the poor.

Ferguson about the financial crisis of 2007-2010, Gnaizda "characterizes the Obama administration as 'a Wall Street government,' a take Mr.

Ferguson clearly endorses." After retiring from the Greenlining Institute, he joined National Asian American Coalition and National Diversity Coalition as their general counsel, where he worked with Faith Bautista to empower minorities in home ownership and economic development.

He died in San Francisco at the age of 83.

Civil rights lawyer
Back
This content was extracted from Wikipedia and is licensed under the Creative Commons Attribution-ShareAlike 3.0 Unported License