He had one credit as director, for the 1992 film Garbo.Cobb also created a symbol which was later featured on the Ecology Flag.

He was born in Los Angeles but spent most of his life in Sydney, Australia. 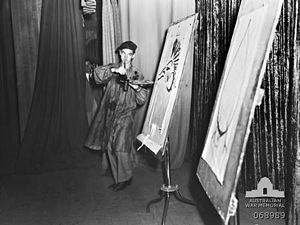 Australian cartoonist
Back
This content was extracted from Wikipedia and is licensed under the Creative Commons Attribution-ShareAlike 3.0 Unported License