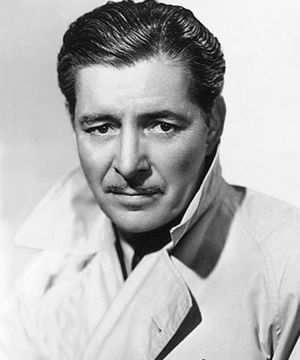 Ronald Charles Colman (9 February 1891 – 19 May 1958) was an English-born actor, starting his career in theatre and silent film in his native country, then emigrating to the United States and having a successful Hollywood film career.

Colman starred in several classic films, including A Tale of Two Cities (1935), Lost Horizon (1937) and The Prisoner of Zenda (1937).He also played the starring role in the Technicolor classic Kismet (1944), with Marlene Dietrich, which was nominated for four Academy Awards.

Colman was an inaugural recipient of a star on the Hollywood Walk of Fame for his work in motion pictures.

He was awarded a second star for his television work.

English-born actor
Back
This content was extracted from Wikipedia and is licensed under the Creative Commons Attribution-ShareAlike 3.0 Unported License