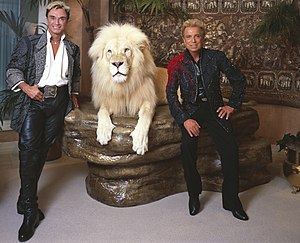 Siegfried & Roy were a duo of American magicians and entertainers, best known for their appearances with white lions and white tigers.

From August 2004 to May 2005, Fischbacher and Horn were executive producers of the animated sitcom Father of the Pride. American magician
Back
This content was extracted from Wikipedia and is licensed under the Creative Commons Attribution-ShareAlike 3.0 Unported License