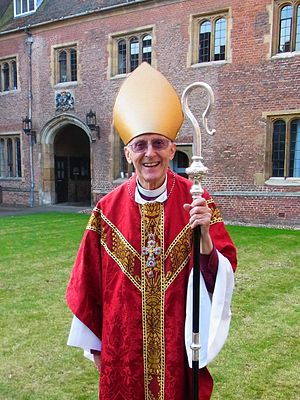 He was educated at Eton College and Magdalene College, Cambridge, from which he graduated Bachelor of Arts (BA) and Cambridge Master of Arts (MA Cantab.).

After service as a Pilot Officer in the Royal Air Force, he taught at theological colleges before being ordained: he was made a deacon at Michaelmas 1956 (30 September), by Gordon Walsh, Assistant Bishop of Ely, at Ely Cathedral and ordained priest the following year.

He was consecrated a bishop by Robert Runcie, Archbishop of Canterbury, on All Saints' Day 1985 (1 November) at Westminster Abbey.Barrington-Ward was later a bishop with pastoral care at the University of Cambridge, an honorary assistant bishop in the Diocese of Ely, honorary assistant chaplain of Magdalene College where he had been an honorary fellow since 1987, and a chaplain to the staff of Ridley Hall, Cambridge.

In the New Year Honours 2001, he was appointed a Knight Commander of the Most Distinguished Order of St Michael and St George (KCMG), having served as the Prelate of that Order.

Following the custom for clergy in the Church of England, he did not use the title of "Sir".He died in April 2020 at the age of 89 from COVID-19.