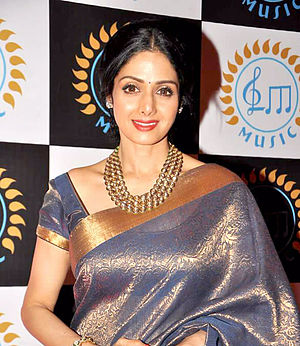 Regarded as one of the greatest stars of Indian cinema and sometimes labelled its "First Female Superstar", she appeared in a range of genres, from slapstick comedy to epic dramas.

Sridevi made her debut as a child actress in the 1967 Tamil film Kandhan Karunai at the age of four, and started her acting career in lead roles as a child in M.

She made her Hindi film debut at age nine inRani Mera Naam (1972).Her first role as a teen-adult came in 1976 at age 13, when she was cast in the Tamil film Moondru Mudichu.

Following a notable appearance in the romantic drama Julie (1975), Sridevi's first starring role in Hindi cinema came with the 1979 drama film Solva Sawan, and she received wider recognition with the 1983 action film Himmatwala.

Following the role of the titular protagonist in the television sitcom Malini Iyer (2004–2005), Sridevi returned to film acting with the highly successful comedy-drama English Vinglish (2012) and then starred in her 300th and final film role in the thriller Mom (2017).

She earned high critical acclaim for her performances in both films, and for the latter was posthumously awarded the National Film Award for Best Actress.

Honorary awards were also conferred on her by the state governments of Andhra Pradesh and Kerala.In 2013, the government of India awarded her the Padma Shri, the country's fourth-highest civilian honour.

She was voted 'India's Greatest Actress in 100 Years' in a CNN-IBN national poll conducted in 2013 on the occasion of the centenary of Indian cinema.

On 24 February 2018, she was found dead of an accidental drowning in her guest room at the Jumeirah Emirates Towers Hotel, in Dubai, United Arab Emirates.

News of her death featured prominently in Indian and international media.She was married to film producer Boney Kapoor, with whom she had two children including actress Janhvi Kapoor.