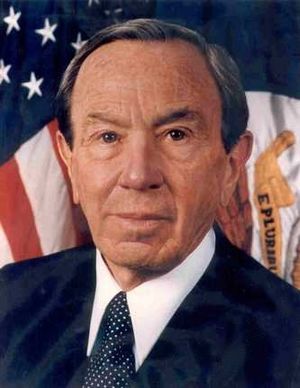 He became a partner in the firm of O'Melveny & Myers and served as Deputy Attorney General from 1967 to 1969 under President Lyndon B.

Johnson.He served as Deputy Secretary of State under President Jimmy Carter, holding that position from 1977 to 1981.In 1991, he chaired the Christopher Commission, which investigated the Los Angeles Police Department in the wake of the Rodney King incident.

As Secretary of State, Christopher sought to expand NATO, broker peace in the Israeli–Palestinian conflict, and pressure China regarding its human rights practices.

He also helped negotiate the Dayton Agreement, which ended the Bosnian War.He left office in 1997, and was succeeded by Madeleine Albright.

Christopher oversaw the Gore campaign's Florida recount effort in the aftermath of the disputed 2000 presidential election.At the time of his death in 2011, he was a Senior Partner at O'Melveny & Myers in the firm's Century City, California, office.

He also served as a professor at the University of California at Los Angeles.

US Statesman
Back
This content was extracted from Wikipedia and is licensed under the Creative Commons Attribution-ShareAlike 3.0 Unported License