Caleb Cushing (January 17, 1800 – January 2, 1879) was an American Democratic politician and diplomat who served as a Congressman from Massachusetts and Attorney General under President Franklin Pierce.

He was an eager proponent of territorial and commercial expansion, especially regarding the acquisition of Texas, Oregon and Cuba.He believed that enlarging the American sphere would fulfill "the great destiny reserved for this exemplar American Republic." Cushing secured the first American treaty with China, the Treaty of Wangxia of 1844; it gave American merchants trading rights in five Chinese ports.

After the Civil War, Cushing negotiated a treaty with Colombia to give the United States a right-of-way for a trans-oceanic Canal.

He helped obtain a favorable settlement of the Alabama Claims, and as the ambassador to Spain in 1870s defused the troublesome Virginius Affair. 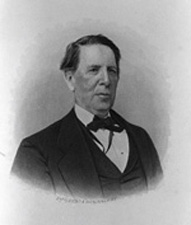