William Diller Matthew FRS (February 19, 1871 – September 24, 1930) was a vertebrate paleontologist who worked primarily on mammal fossils, although he also published a few early papers on mineralogy, petrological geology, one on botany, one on trilobites, and he described Tetraceratops insignis, which was much later suggested to be the oldest known (Early Permian) therapsid.

Matthew was born in Saint John, New Brunswick, the son of George Frederic Matthew and Katherine (Diller) Matthew.His father was an amateur geologist and paleontologist who instilled his son with an abiding interest in the earth sciences.

Matthew received an A.B. at the University of New Brunswick in 1889 and then earned his Ph.D. at Columbia University in 1894.

Matthew was curator of the American Museum of Natural History from the mid-1890s to 1927, and director of the University of California Museum of Paleontology from 1927 to 1930.

He was the father of , a noted artist, illustrator, and sculptor who specialized in visualizing extinct species. 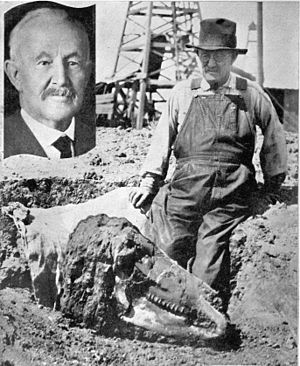 American paleontologist
Back
This content was extracted from Wikipedia and is licensed under the Creative Commons Attribution-ShareAlike 3.0 Unported License