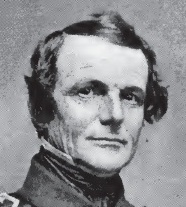 William Radford (September 9, 1809 – January 8, 1890) was a rear admiral of the United States Navy who served during the Mexican–American War and the American Civil War, in which he remained loyal to the Union, despite his Virginia birth.

Radford commanded the Ironclad Division in the attacks on Fort Fisher (December 1864/January 1865) to assert Union control of Cape Fear.

United States Navy Rear Admiral
Back
This content was extracted from Wikipedia and is licensed under the Creative Commons Attribution-ShareAlike 3.0 Unported License