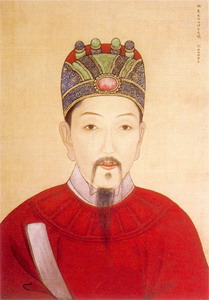 Widely regarded as a patriot in Chinese culture, he is best known for defending Liaoning from Jurchen invaders during the Later Jin invasion of the Ming.

As a general, Yuan Chonghuan excelled as a cannoneer and sought to incorporate European cannon designs into the Ming arsenal.

Yuan's military career reached its height when he defeated the Jurchen ruler, Nurhaci, and his army in the first Battle of Ningyuan.

Later on, Yuan also defeated Nurhaci's son and successor, Hong Taiji, and his 200,000-strong army composed of mostly Mongol soldiers at the second Battle of Ningyuan.

Yuan met his end when he was arrested and executed by lingchi ("slow slicing") on the order of the Chongzhen Emperor under false charges of treason, which were believed to have been planted against him by the Jurchens.