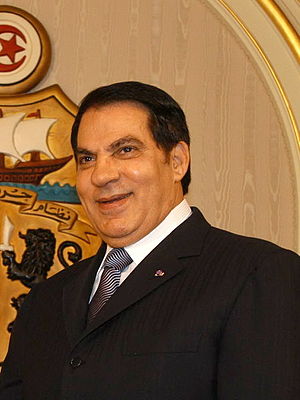 Zine El Abidine Ben Ali (Arabic: زين العابدين بن علي‎, Zayn al-'Ābidīn bin 'Alī; 3 September 1936 – 19 September 2019), commonly known as Ben Ali (Arabic: بن علي‎) or Ezzine (Arabic: الزين‎), was a Tunisian politician who was the second President of Tunisia from 1987 until his fall in 2011 after the revolution of Tunisia .

Ben Ali was appointed Prime Minister in October 1987.He assumed the Presidency on 7 November 1987 in a bloodless coup d'état that ousted President Habib Bourguiba by declaring him incompetent.

Ben Ali was subsequently reelected with enormous majorities, each time exceeding 90% of the vote; his final re-election coming on 25 October 2009.

Ben Ali was the penultimate surviving leader deposed in the Arab Spring who was survived by Egypt's Hosni Mubarak, the latter dying in February 2020.

On 14 January 2011, following a month of protests against his rule, he was forced to flee to Saudi Arabia along with his wife Leïla Ben Ali and their three children.

The interim Tunisian government asked Interpol to issue an international arrest warrant, charging him with money laundering and drug trafficking.

A Tunisian court sentenced Ben Ali and his wife in absentia to 35 years in prison on 20 June 2011 on charges of theft and unlawful possession of cash and jewelry, which was put up for auction.

In June 2012, a Tunisian court sentenced him in absentia to life imprisonment for inciting violence and murder and another life sentence by a military court in April 2013 for violent repression of protests in Sfax.

He served none of those sentences, subsequently dying in Jeddah, Saudi Arabia on 19 September 2019 at the age of 83 after nearly a decade in exile.

President of Tunisia
Back
This content was extracted from Wikipedia and is licensed under the Creative Commons Attribution-ShareAlike 3.0 Unported License