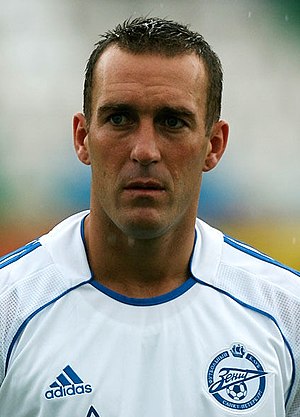 Fernando Jacob Hubertina Henrika Ricksen (27 July 1976 – 18 September 2019) was a Dutch professional footballer who played as a right back and central midfielder.

After winning Eerste Divisie titles with Fortuna Sittard and AZ, he joined Rangers for £3.75 million in 2000.In six years with the club from Glasgow, he won two Scottish Premier League titles, two Scottish Cups and three Scottish League Cups.

He left in 2006 for Zenit Saint Petersburg, initially on loan, and won honours including the UEFA Cup and UEFA Super Cup in 2008.

He was dismissed by Zenit in 2009, and spent the final years of his career back at Fortuna Sittard.Internationally, he earned 12 caps for the Netherlands between 2000 and 2003.

Ricksen was elected to Rangers's Hall of Fame in 2014.He suffered from motor neurone disease and died from the disease on 18 September 2019, aged 43.