After receiving an education in mission schools, he returned to Maryland to study theology.Ordained a priest, he served as rector of the Episcopalian Trinity Church in Monrovia.

President Gibson began his political life as a justice of the peace.With the election of William D.Coleman as president in 1896, Gibson was appointed .

He was Secretary of State when Coleman resigned in 1900, and since there was no vice-president, Gibson was chosen to succeed him.

He won the election that same year, and served until 1904, when his Secretary of the Treasury, Arthur Barclay, succeeded him.

President Gibson died in Monrovia on April 26, 1910.He was the last Liberian president to have been born in the United States. 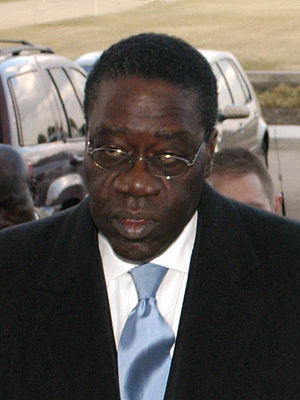 Liberian politician
Back
This content was extracted from Wikipedia and is licensed under the Creative Commons Attribution-ShareAlike 3.0 Unported License