Ekaterina Sergeevna Maximova (Russian: Екатерина Сергеевна Максимова; 1 February 1939 – 28 April 2009) was a great Soviet and Russian ballerina of the second part of the 20th century who had international recognition and fame.

She was a prima ballerina of the Bolshoi Theatre for 30 years, a ballet pedagogue, People's Artist of the USSR and Russian Federation, winner of international ballet competitions, Laureate of many prestigious International and Russian awards, a professor in GITIS, Honorary professor at the Moscow State University, Academician of the Russian Academy of Arts, and an Executive Committee member of the Russian Center of Counseil International De La Danse, UNESCO 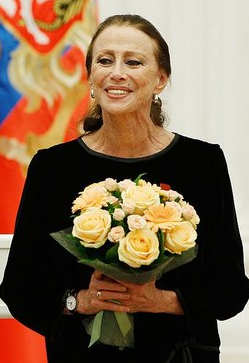