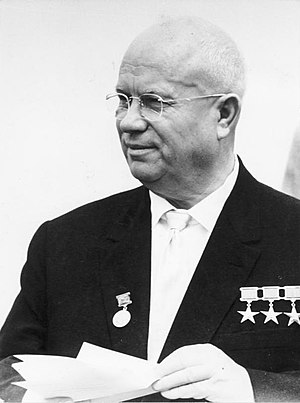 During his rule, Khrushchev stunned the communist world with his denunciation of Stalin's crimes, and embarked on a policy of de-Stalinization with his key ally Anastas Mikoyan.

He sponsored the early Soviet space program, and enactment of relatively liberal reforms in domestic policy.After some false starts, and a narrowly avoided nuclear war over Cuba, he conducted successful negotiations with the United States to reduce Cold War tensions.

His proclivity toward recklessness led the Kremlin leadership to strip him of power, replacing him with Leonid Brezhnev as First Secretary and Alexei Kosygin as Premier.

Khrushchev was born in 1894 in a village in western Russia.He was employed as a metal worker during his youth, and he was a political commissar during the Russian Civil War.

Under the sponsorship of Lazar Kaganovich, he worked his way up the Soviet hierarchy.He supported Joseph Stalin's purges and approved thousands of arrests.

In 1938, Stalin sent him to govern the Ukrainian SSR, and he continued the purges there.During what was known in the Soviet Union as the Great Patriotic War, Khrushchev was again a commissar, serving as an intermediary between Stalin and his generals.

Khrushchev was present at the bloody defense of Stalingrad, a fact he took great pride in throughout his life.After the war, he returned to Ukraine before being recalled to Moscow as one of Stalin's close advisers.

On 5 March 1953, Stalin's death triggered a power struggle in which Khrushchev emerged victorious upon consolidating his authority as First Secretary of the party's Central Committee.

On 25 February 1956, at the 20th Party Congress, he delivered the "Secret Speech", which denounced Stalin's purges and ushered in a less repressive era in the Soviet Union.

His domestic policies, aimed at bettering the lives of ordinary citizens, were often ineffective, especially in agriculture.Hoping eventually to rely on missiles for national defense, Khrushchev ordered major cuts in conventional forces.

Despite the cuts, Khrushchev's time in office saw the tensest years of the Cold War, culminating in the Cuban Missile Crisis.

Khrushchev enjoyed strong support during the 1950s thanks to major victories like the Suez Crisis, the launching of Sputnik, the Syrian Crisis of 1957, and the 1960 U-2 incident.

By the early 1960s however, Khrushchev's popularity was eroded by flaws in his policies, as well as his handling of the Cuban Missile Crisis.

This emboldened his potential opponents, who quietly rose in strength and deposed him in October 1964.However, he did not suffer the deadly fate of previous Soviet power struggles and was pensioned off with an apartment in Moscow and a dacha in the countryside.

His lengthy memoirs were smuggled to the West and published in part in 1970.Khrushchev died in 1971 of a heart attack.