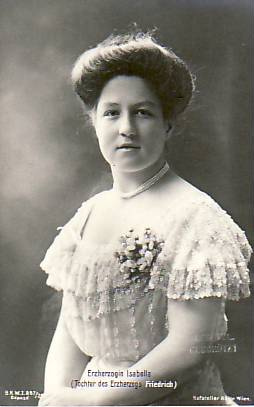 Archduchess Isabella Maria Theresia Christine Eugenie of Austria-Teschen (17 November 1888 – 6 December 1973) was a daughter of Archduke Friedrich, Duke of Teschen and his wife, Princess Isabella of Croÿ.

She was a member of the House of Habsburg-Lorraine (her grandfather, Archduke Karl Ferdinand of Austria, was a grandson of Holy Roman Emperor Leopold II).

Isabella was notable for her brief marriage to Prince Georg of Bavaria.Their separation and subsequent annulment were widely reported in newspapers.

As a result of this and her later actions as a nurse in the Austrian army, Isabella became considered as a romantic figure; one publication called her "the most romantic heroine of the present war in Austria". 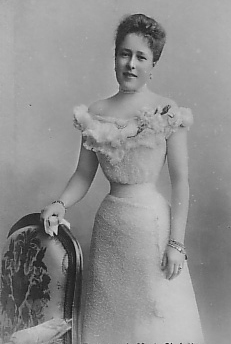 
Archduchess of Austria
Back
This content was extracted from Wikipedia and is licensed under the Creative Commons Attribution-ShareAlike 3.0 Unported License