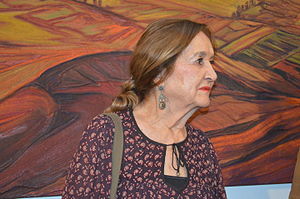 Rina Lazo Wasem (October 23, 1923 – November 1, 2019) was a Guatemalan-Mexican painter.She began her career in mural painting with Diego Rivera as his assistant.

She worked with him from 1947 until his death in 1957 on projects both in Mexico and Guatemala.Thereafter, she remained an active painter, better known for her mural works than canvases, although the latter have been exhibited in Mexico and other countries.

This has made her one of Guatemala's best-known artists.She was a member of the Mexican muralism movement and criticized modern artists as too commercial and not committed to social causes.

She believed muralism would revive in Mexico because of its historical value.