Hugh Simons Gibson (August 16, 1883 – December 12, 1954) was an American diplomat.He was actively involved in disarmament talks from 1925 to 1932.Throughout his career, he remained a leading proponent in the drive to establish a professional Foreign Service based on merit rather than personal wealth or political influence.

As first American minister plenipotentiary to Poland in the chaotic postwar years from 1919 to 1924, he was called upon to respond to the acute problems of a renascent state while investigating reports of pogroms and mistreatment of Polish Jews.

His reporting on this highly sensitive matter was surrounded by controversy, but ultimately won the approval of significant figures in the American Jewish community.

His close friendship with Herbert Hoover began in this context.He retired from the Foreign Service in 1938, worked in London for the Commission for Relief in Belgium (CRB) during the first two years of the war.

He then returned to the United States and worked in publishing at Doubleday and, following the end of the war, published the journals of Joseph Goebbels, Galeazzo Ciano, and Ulrich von Hassell.

In his final years he ran the Intergovernmental Committee for European Migration in Geneva. 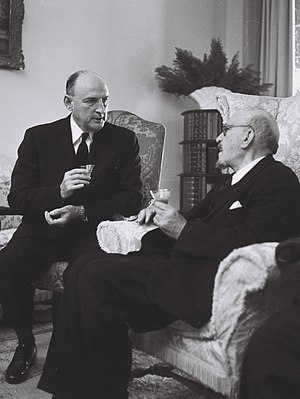